1.   Which of the following combinations do not apply to DNA?

4.   During DNA replication, one strand is synthesised in small stretches called …………

5.   Note the relationship between first two words and fill up the fourth place.

7.   In a DNA segment, cytosine is 22%. Find out the percentage of adenine, thymine and guanine.

8.   Identify the structure given below. Label A, B and C. 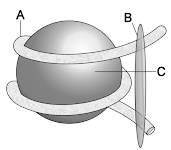 a.   Name the two forms of chromatin.

b.   Mention any two differences.

10.  Following are the first two steps in Griffith’s transformation experiment.

a.   If there is any mistake correct it.

b.   Write the remaining steps.

11.  Blender experiment (Hershey and Chase experiment) proved that DNA is the genetic material.

a.     Name the organisms used for this experiment.

b.    What are the steps involved in this experiment?

12.  DNA is the better genetic material than RNA. Do you agree with this statement? Substantiate.

13.  The flow of genetic information is shown below:

14.  Results of a famous experiment is given in the figure.

a.   Identify the experiment.

b.   Which property of DNA is proved by experiment?

16. Read the sequence of codon in the mRNA unit.

a.   What changes is needed in the first codon to start the translation process?

b.   If translation starts by that change, till which codon it can be continues?

17. Observe the diagram and answer the question. 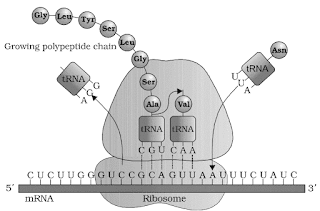 a.   Identify the process and its site.

b.   What is the role of mRNA and tRNA in this process?

18. Human Genome Project (HGP) was the first mega project for the sequencing of nucleotides and mapping of all the genes in human genome.

a.  What are the two main approaches in the methodologies of HGP?

19. Schematic representation of DNA finger prints is given. 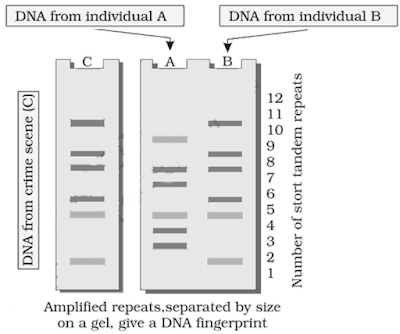 a.  Which one of the suspected individuals may involve in the crime?

b.  Write any other use of DNA fingerprint.

20. Observe the diagram and answer the question. 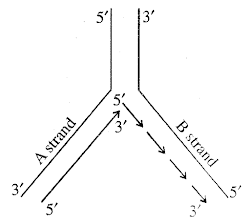 a.  What is meant by replication fork?

b.  What is the difference in the replication process in strand A and strand B?

c.  What is the role of DNA ligase in the replication process in B strand?

21. A transcription unit is given below. Observe it and answer the question.

a. How can you identify the coding strand?

b. Write the sequence of RNA formed from this unit.

c. What would happened if both strand of DNA act as template for transcription?

22.  Given below is the diagrammatic representation of first stage of a process in a bacterium.

a.   Identify the process.

b.   Name the enzyme catalyses this process.

c.   What are the additional complexities in eukaryotes in this process?

23.  With the help of the figure given, explain the processing of hnRNA to mRNA in eukaryotes. 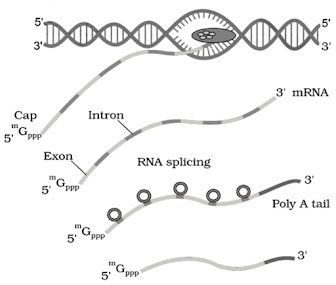 a.  Find the start codon and stop codon.

b.  How many amino acids will be present in the protein translated from this mRNA?

a.  Which property of genetic code is the reason for the above condition? Explain.

b.  Which are the stop codons in DNA translation?

26.  A DNA sequence for coding a peptide is given below:


a.  Write the sequence of complementary mRNA.

b.  Find out the amino acids sequence of peptide chain using the codon given in the hints.

c.  Coding region of a gene consists of 450 nucleotide base pairs. Avoiding stop codons & introns, how many amino acids would the corresponding polypeptide chain contain? Justify your answer.

27.  In an E. coli culture, lactose is used as food instead of glucose.

a.   How do the bacteria respond to this situation at genetic level?

b.   If lactose is removed what will happen?

28. Lac operon in the absence of inducer (Lactose) is given. 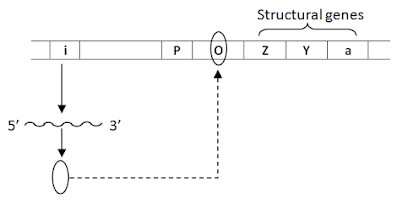 c.  Redraw the diagram in the presence of an Inducer.

29. a) The steps in DNA Finger printing are given below. Complete the flow chart (A and B).

b) Mention the application of DNA finger printing.

30. A small fragment of a skin of different person was extracted from nails of a murdered person. This led the crime investigators to the murder.

a.  What technique was used by the investigators?

b.  What is the procedure involved in this technique?

9.   (a) Euchromatin and Heterochromatin.

(b) Euchromatin: Loosely packed and transcriptionally active region of chromatin. It stains light.

(b) Infection bacteriophage with E. coli.

Blending to remove the virus particles from the bacteria.

12. Yes. For the storage of genetic information, DNA is better due to its stability.

(b) Semi-conservative model of DNA replication.

(b) Translation continues till 5th codon (UUU) because after that the stops codon UGA comes. So translation is stopped.

Read carefully the sequence of codon in the mRNA unit and answer the question.

17. (a) Translation (Protein synthesis). Its site is ribosome.

(b) mRNA: Provide template for translation.

(b) For the diagnosis of genetic diseases.

20. (a) Unwinding of the DNA molecule at a point forms a ‘Y’-shaped structure called replication fork.

(c) It helps to join the Okazaki fragments formed (due to discontinuous synthesis) together to form a new strand.

(c) If 2 RNA molecules are produced simultaneously, this would be complimentary to each other. It forms a double stranded RNA and prevents translation

(c) There are 3 RNA polymerases (RNA polymerase I, II & III). The primary transcripts (hnRNA) contain exons and introns and are non-functional. Hence introns must be removed.

23. Steps of processing of hnRNA to mRNA:

Splicing: From hnRNA, introns are removed (by the spliceosome) and exons are spliced (joined) together.

Capping: Here, a nucleotide methyl guanosine triphosphate (cap) is added to the 5’ end of hnRNA.

25. (a) Degeneracy. An amino acid (except methionine & tryptophan) is coded by more than one codon. They are called degenerate codons.

27. (a) If lactose is provided in the growth medium, it is transported into E. coli cells by the action of permease. Lactose (inducer) binds with repressor protein. So repressor protein cannot bind to operator region. The operator region becomes free and induces the RNA polymerase to bind with promoter. Then transcription starts.

(b) If there is no lactose, lac operon remains switched off. The regulator gene synthesizes mRNA to produce repressor protein. This protein binds to the operator region and blocks RNA polymerase movement. So the structural genes are not expressed.

28. (a) P is the promoter for structural genes.

29. (a) A = Digestion of DNA by restriction endonucleases. B= Hybridization using radioactive labelled VNTR probe.

For the diagnosis of genetic diseases.

To determine phylogenetic status of animals.

To determine population and genetic diversities.

iv. Transferring DNA fragments to synthetic membranes such as nitrocellulose.