2.    Which of the following is not come under male accessory glands?

6.    The following statements compare the process of Oogenesis and spermatogenesis. Which one is not true?

(a)  Production of ovum ceases at certain age, but sperm production continues even in old men.

(b)  Oogenesis begins in the embryonic stages, but spermatogenesis starts at the onset of puberty.

(c)  Meiotic arrest occurs both in Oogenesis and spermatogenesis.

7.    Note the relationship between first two terms and fill up the fourth place.

(a)    Ampullary region of fallopian tube

(b)    Endometrial lining of uterus

11.  In uterus, implantation occurs in the layer called ……….

12.  Note the relationship between first two terms and suggest a suitable term for the fourth place.

13.  Structural and functional unit between mother and foetus is called ………….

15.  Name the yellowish milk produced in the first few days of lactation.

16.  Testes of a baby are found to be not descent from abdominal cavity into scrotal sac. What will be its consequence if proper treatment is not given?

17.  “Hymen is not a reliable indicator of virginity or sexual experience.” Justify the statement.

18.  Rearrange the following in correct sequence:

19.  Complete the flow chart showing spermatogenesis by filling A and B and answer the question.

(a)    What is the chromosome number of primary spermatocytes?

(b)    What is the significance of reduction division in spermatogenesis and oogenesis?

22.  Select the odd one and justify your answer.

23.  Diagram of mammalian sperm is given below. 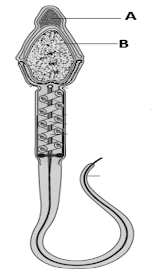 24.  Observe the diagram and identify the process. 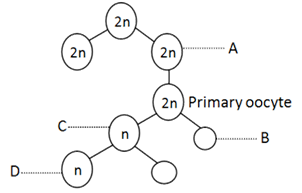 (b)  Why the gametes produced are haploid even though the gamete mother cells are diploid?

26.  Ovulation does not take place during gestation period. Give reason.

27.  All copulations do not lead to fertilization & pregnancy. Why?

28.  Given below is the diagrammatic representation of Human blastocyst. Observe the diagram and answer the following questions.

29.  Mention any 4 functions of placenta.

30.  When the urine sample of a lady is tested, presence of Human chorionic gonadotropin (HCG) was detected.

(a)    What does the presence of HCG indicate?

(a)    Name the fluid secreted by mother from breast during the initial days of lactation.

(b)    Why it is important for new born infants?

32.  Schematic representation of Gametogenesis is given.

(b)    What does smaller shaded circle in B represent? Mention its significance.

33.  Observe the diagram and answer the question. 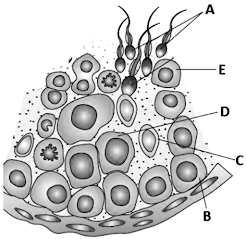 (c)    In which of the marked part reduction division takes place? What is its significance? 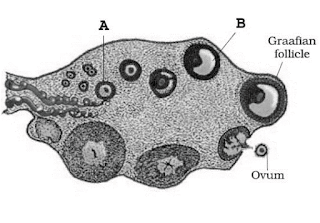 (b)    Name the process that induces the rupture of Graafian follicle.

(c)    Write the name and function of the structure forming in ovary after rupture of Graafian follicle.

36. Some stages of embryonic development are given below. Observe the diagram and answer the question.

(b)    Name the two types of cells found in Blastocyst.

(c)    Which layer of blastocyst is attached to the endometrium? Name the process.

37.  LH and FSH have important roles in menstrual cycle.

(b)    The level of LH is maximum during the middle day of cycle. Mention its effect.

6.    (c) Meiotic arrest occurs both in Oogenesis and spermatogenesis.

10.  (a) Ampullary region of fallopian tube

16. If testes are not descent into scrotal sac, proper functioning of testes and spermatogenesis do not occur.

17.  Hymen may be broken by a sudden fall or jolt, insertion of a vaginal tampon; active participation in some sports items etc. In some women, hymen persists after coitus. So the hymen is not a reliable indicator of virginity or sexual experience.

(b) Reductional division (Meiosis) in spermatogenesis and oogenesis is essential to form haploid gametes (n) with 23 chromosomes. Therefore, during fertilisation chromosome number can be maintained to 46.

22.  Odd one: Androgen. Because it is the male sex hormone. Others are produced in female reproductive system.

(b) It contains lytic enzymes that help the sperm to penetrate ovum during fertilisation.

(b) During gametogenesis, meiotic division results in the production of haploid gametes. So, during fertilisation, chromosome number can be maintained to 46.

(b) It is the pregnancy hormone that makes the endometrial lining maximum vascular and glandular and maintains pregnancy.

26. During gestation period, progesterone inhibits the FSH secretion to prevent development of another ovarian follicle.

27.  Fertilization happens only if ovum & sperms are transported simultaneously. So all copulations do not lead to fertilization & pregnancy.

(b) A (inner cell mass) becomes embryo. B (Trophoblast) gives nourishment and protection to developing embryo.

(b) Remove CO2 from foetus.

(d) Acts as an endocrine gland.

(b) It contains many antibodies that gives immunity to the new born baby. It protects the baby from infections.

(b) They are polar bodies. Formation of polar bodies helps to produce only a single ovum in each menstrual cycle. Also, ovum gets more cytoplasm.

(c) During spermatogenesis, each primary spermatocyte can give 4 sperms. But during oogenesis, one primary oocyte produces only one ovum.

(b) C (Sertoli cells) give nourishment and shape to the developing sperms.

(b) LH surge that results in ovulation.

(b) Maximum level of LH (LH surge) results in ovulation.