1.   Which theory states that the units of life (spores) were transferred to different planets including earth?

2.   Which of the following sets of gases were used in Miller’s experiment?

3.   Note the relationship between the first pair and complete second pair.

4.   …………… is the evolution of different species from an ancestor in a geographical area starting from a point.

5.   Theory of Inheritance of acquired characters is proposed by ………………

6.   Nam the two key concepts of Darwinian Theory of Evolution.

8.   Theory of chemical evolution is a version of theory of abiogenesis. Analyse the statement.

9.   Observe the concept diagram given below.

a.   Identify the type of evolution in A and B.

b.   Write one example each for homologous and analogous organs.

10. The given pictures show the beaks of Darwin’s finches seen in Galapagos island during Darwin’s journey.

a.   What phenomenon in evolution is represented in the picture?

b.   Explain the phenomenon with the help of an additional example.

a.     In which plant de Vries conducted his experiments?

b.     Mention any 3 differences between mutation and Darwinian variation.

13. Diagrammatic representation of the operation of the natural selection in a population is given. 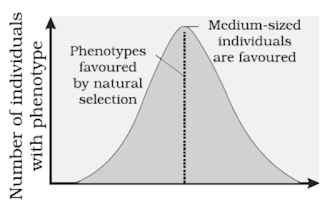 14. Arrange the following in a hierarchical manner in ascending order based on their period of evolution.

15. Statements below show features of some human fossils. Read carefully and identify the fossil.

b.   Lived in east and central Asia with brain capacity 1400 cc.

16. Categorize the following examples into Homologous organ and analogous organ.

·  Fore limb of whale and bat

·  Thorns of Bougainvillea & tendrils of Cucurbita.

·  Wings of butterfly and bat.

·  Heart of man and cheetah.

·  Eye of octopus and mammals.

17. Observe the diagrammatic representation given below. 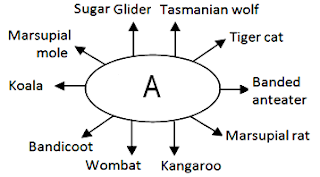 a.  Label A and mention the phenomenon.

b.  How can it consider as an evidence of evolution?

c.  Write any other example for this phenomenon. Explain.

18.  A collection of peppered moths made in England during different period is given below.

a.   What is your observation?

b.   Name the evolutionary process behind this process.

c.   Write the reason for decreased number of white winged moth in 1920.

19.  Read the principle and answer the question:

“Allele frequencies in a population are stable and are constant from generation to generation called genetic equilibrium.”

a.  Name the principle mentioned here.

c.  What is the significance of disturbance occur in genetic equilibrium?

21. Given below is the diagrammatic representation of operation of natural selection on different traits. 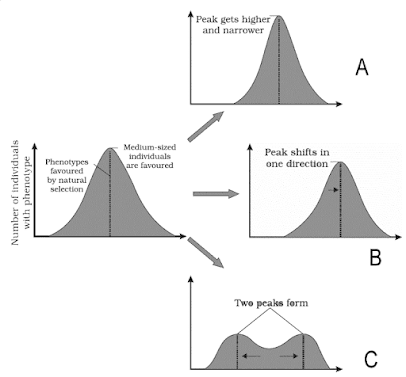 a.  Identify the type of natural selection A, B & C.

b.  Briefly explain each of them.

8.   This statement is true to some extent. Theory of abiogenesis states that life came out of some non-living matters. Theory of chemical evolution states that the first form of life was originated from inorganic & organic molecules. Thus both theories say about the origin of life from non-living things.

Analogous organs: E.g. Wings of insects and wings of birds.

(b) Adaptive radiation is the evolution of different species from an ancestor in a geographical area starting from a point. E.g. Marsupial radiation in Australia.

(b) Darwinian variation is minor, slow and directional. It results in gradual evolution. 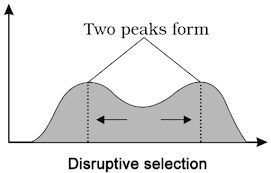 17. (a) A= Marsupial radiation. The phenomenon is Adaptive radiation.

(b) It is an evolution of different species of marsupials from an ancestor in Australia. It is a type of divergent evolution.

18. (a) It denotes the variations in the number of white winged moths and dark winged moths in different periods.

(c) After industrialization (1920), the tree trunks became dark due to industrial smoke and soot. No growth of lichens. So white winged moths did not survive because the predators identified them easily. Dark winged moth survived because of suitable dark background.

(c) It results in evolution.

Directional selection: Individuals of one extreme are more favoured.

Disruptive selection: Individuals of both extremes are more favoured.