2.    Most diverse group of organisms are


3.    Z value of a frugivorous species are given below. Which value is not applicable to continents?


4.    Note the relationship between first two words and fill up the fourth place.

5.    IUCN published the details of various extinct animals. This list is known as …………….

6.    Which of the following is an example for extinction due to overexploitation?


7.    Write a slogan stressing the significance of biodiversity conservation.

8.    The most threatened regions with very high species richness and high degree of endemism are called ………

9.    Biologists are not sure about total number of prokaryotic species. Give 2 reasons.

10.    Biodiversity (species richness) is highest in tropics. Give any two reasons.

11.    Observe the graph that explains Species-Area relationship. Name S, A, Z and C. 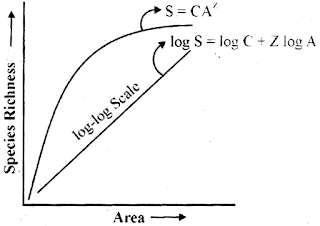 12.    The given graph shows the distribution of insects in different latitude of earth. 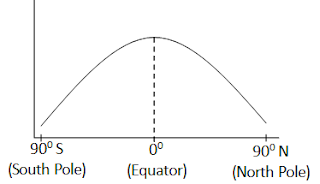 a. What is your observation?
b. Mention the Evil Quartet that causes of biodiversity loss.

13.    Z values of Species – area relationship of four regions are given below:

14.    There are 3 categories of reasons for biodiversity conservation. Name them with suitable examples.

15.    Two approaches for the conservation of biodiversity are shown as A and B. 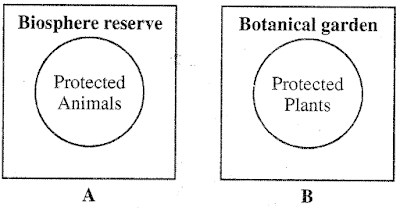 16.    “Nature provides all for the need of man but not for his greed”

i. Conventional taxonomic methods are not suitable for identifying microbial species.
ii. In laboratory, many species cannot be cultured.

a. Species diversity decreases from the equator to the poles.
b. Habitat loss and fragmentation, Overexploitation, Alien species invasion and Co-extinction.

a. Area C.
b. Tropical Amazonian rain forest.
c. It is an analogy used to understand the importance of biodiversity. In an airplane (ecosystem), all parts are joined with rivets (species). If passengers pop a rivet (extinction of a species), it may not affect flight safety (functioning of the ecosystem). But as more rivets are removed, the plane becomes weak. Loss of rivets on the wings (key species that drive major ecosystem functions) is more dangerous.

(a) Narrowly utilitarian arguments: Human derive economic benefits from nature such as food, firewood, fibre, construction material, industrial products and medicines.
(b) Broadly utilitarian arguments: Biodiversity has many ecosystem services. E.g. Production of oxygen, Pollination, Aesthetic pleasures etc.
(c) Ethical arguments: Every species has an intrinsic value. We have to care for their well-being.

a. Yes. If we overexploit the biodiversity, it leads to extinction of many organisms. Thus the balance of ecosystem will be disturbed. So ecosystem services like pollination and productivity is decreased. Ultimately, it will affect all organisms including human being.
b. In situ conservation: Conservation of organisms within natural or human-made ecosystems. E.g. National Parks, Sanctuaries, Biosphere reserves.
Ex situ conservation: Conservation of organisms outside their habitats. E.g. genetic resource centres, zoological parks, botanical gardens.