3. PRINCIPLES OF INHERITANCE AND VARIATION

1.     Select a female heterogametic animal from the following: (1)

(a)    Identify the Inheritance.

(b)   Give an example for this type of Inheritance.

(b) Flower colour in Snap dragon

1.  From the following, find out the symbol used in the human pedigree analysis representing male. (1) 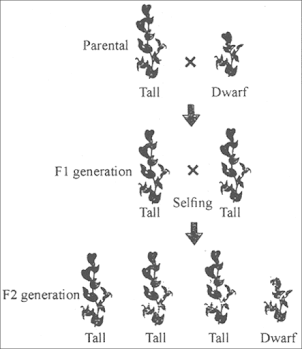 a.   Identify the cross.

b.  Which are the laws proposed by Mendel based on these observations?

(b) Law of Dominance, Law of Segregation.

3.   Correct the following statements, if there is any mistake: (2)

a.  Haemophilia is an autosome linked recessive disease.

b.  Turner's syndrome is due to the presence of an additional copy of X chromosome.

(a) Haemophilia is a sex-linked recessive disease.

Klinefelter’s syndrome is due to the presence of an additional copy of an X chromosome. 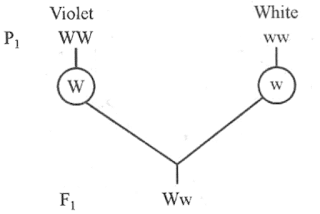 a.   By using the F1 progeny design a test cross.

b.   Mention the significance of test cross.

(b) It is used to find out the unknown genotype of a character.

3.   Each symptom of two chromosomal disorders are given below: (2)

a.  Identify the disorders.

b.  Give the reason for these disorders.

(b) Klinefelter’s syndrome: Presence of an additional copy of X-chromosome in male.

Turner’s syndrome: Absence of one X chromosome in female

1.   "The sex of the baby is determined by the father and not by the mother." Do you agree with this statement ? Substantiate your answer. (2)

Phenylketonuria. Because it is a Mendelian disorder. Others are chromosomal disorders.

3.   The amino acid composition of the relevant portion of chain of two haemoglobin molecules (A & B) are shown below. (3)

a.   Which one of the polypeptide chain is abnormal?

b.   Name the disorder caused by it.

c.   What is the reason for this abnormality?

d.   What is the effect of this abnormality in such individuals?

(c) This is due to the single base substitution at the sixth codon of the β-globin gene from GAG to GUG.

(d) The mutant Hb molecule undergoes polymerization under low oxygen tension causing the change in shape of the RBC from biconcave disc to elongated sickle like structure. 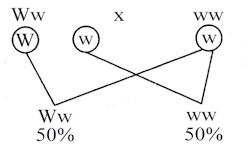 a.  Identify the cross.

b.  Mention the significance of this cross.

(b) It is used to find out the unknown genotype of a character.

a.  Which among the above indicates sickle cell anaemic condition?

b.  Justify your answer.

c.  Describe what is single base substitution.

(b) In the sixth position, glutamic acid replaced by valine.

(c) Substitution of a single base in the sixth codon GAG to GUG.

3.   The blood group of a child is ‘O’. His father is with 'A' blood group and mother with 'B' blood group. Write down the genotype of the child and genotypes of parents. (2)

Genotype of the child: ii (O group is always ii).

Genotype of the father: IAi

Genotype of the mother: IBi

1.   ln a classroom discussion, a student said that the sex of the baby is determined by father. Analyse the statement and give reason for it. (2) 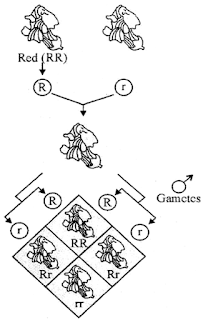 (a) Observe the above cross and name the phenomenon.

(b) Write down the theoretically given explanations of the phenomenon. (2)

(b) It is an inheritance in which heterozygous offspring shows intermediate character b/w two parental characteristics.

(a) What do you mean by Mendelian disorder?

(b) Which one of the above is an example of inborn error of metabolism? Mention the cause of the disorder.

(a) Mendelian disorders are the disorders caused by the alteration or mutation in the single gene.

(b) Phenyl Ketonuria. It is due to mutation of a gene that codes for the enzyme phenyl alanine hydroxylase. As a result, phenylalanine accumulates and converts into phenyl pyruvic acid and other derivatives