INHERITANCE OF ONE GENE
Monohybrid cross:

A cross involving 2 plants differing in a character pair. 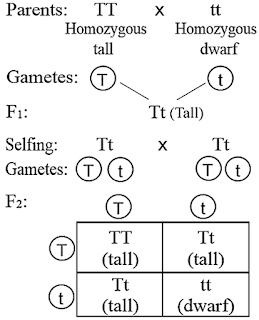 Backcross: Cross b/w a hybrid & its any parent.

Test cross is used to find out the unknown genotype of a character. 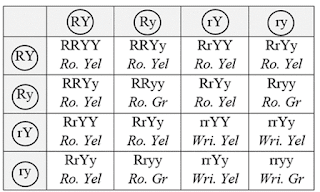 “During gamete formation, factors (alleles) of a character pair segregate each other such that a gamete receives only one of the 2 factors”.

It is an inheritance in which heterozygous offspring shows intermediate character b/w two parental characteristics. 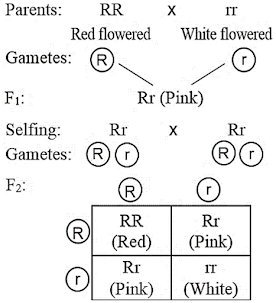 More than two alleles of a gene govern same character.

The inheritance in which both alleles of a gene are expressed in a hybrid. E.g. ABO blood grouping in human.

ABO blood groups are controlled by the gene I.

The gene I has three alleles IA, IB & i.

When IA and IB are present together, they both express (AB group).
CHROMOSOMAL THEORY OF INHERITANCE (Sutton & Boveri)
Genes (factors) are present on chromosomes. Hence genes and chromosomes show similar behaviours.

Linkage: Physical association of two genes on a chromosome.

Morgan intercrossed their F1 progeny. He found that
MECHANISMS OF SEX DETERMINATION

Autosomes are chromosomes other than sex chromosomes.
Sex Determination in Humans (XX-XY)

Thus the sperm determines whether the offspring male or female.

Sudden heritable change in DNA. 2 types:
Mutagens: Agents which induce mutation. 2 types.
PEDIGREE ANALYSIS
Analysis of genetic traits in several generations of a family. It helps to understand whether a trait is dominant or recessive.

Parents above & children below: 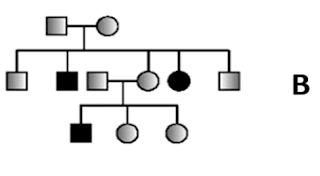 Colour blindness:
Phenylketonuria:
2. Chromosomal Disorders
Due to change in number or structure of chromosome.

Presence of an additional X-chromosome in male.

Absence of an X chromosome in female.