Biotechnology and its Applications | Plus 2 Botany | Exam Capsule Notes

BIOTECHNOLOGY & ITS APPLICATIONS:
CHAPTER AT A GLANCE
APPLICATIONS IN AGRICULTURE

When an insect ingests the toxin, it becomes active.

Bt toxin genes from B. thuringiensis incorporated into crop plants such as cotton.

A nematode Meloidogyne incognitia infects roots of tobacco plants. It can be prevented by RNA interference (RNAi).

RNAi is a cellular defense in eukaryotes. It prevents translation of an mRNA (silencing) due to a dsRNA molecule.

Recombinant therapeutics does not have unwanted immunological responses.

In mammals, insulin is synthesized as a pro-hormone (pro-insulin).

The pro-hormone contains an extra stretch called C peptide. This is removed during maturation into insulin. 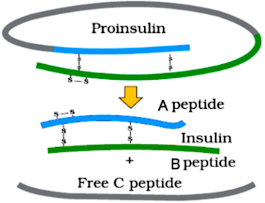 2. Gene Therapy
It is a method to correct a gene defect in a child/embryo.

Gene therapy for ADA deficiency:
Collect lymphocytes from the patient’s blood and grow in a culture → Introduce a functional ADA cDNA into lymphocytes (using a retroviral vector) → They are returned to the patient.

If the ADA gene is introduced into cells at early embryonic stages, it could be a permanent cure.