2010 March
1. Glycolysis and Krebs’ cycles are the two important steps in aerobic respiration. Suggest where exactly in the cell these events take place. (1)

2. Plants are living organisms respiring just like animals taking in oxygen and giving out carbon dioxide. But, they are without any organ for this purpose. Mention any two reasons for it. (2)

3. Suggest a method for finding out the biochemical compound used as the respiratory substrate in plants. (1)

1. Diagrammatic representation of Krebs cycle is given below with some omissions. (4) 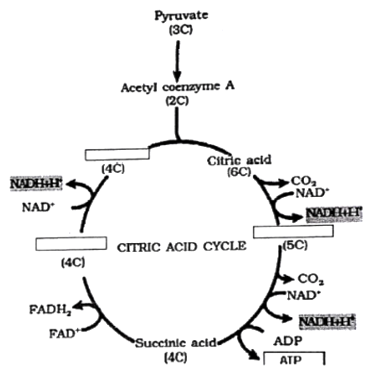 a. Complete the diagram by filling the gaps.
b. Where does the substrate level phosphorylation occur in Krebs cycle?

1. In most woody trees, epidermis breaks to form a lens shaped opening. Name this opening that permits gaseous exchange. (1)

2. Breakdown of glucose into two molecules of pyruvic acid is called glycolysis. Draw the scheme of glycolysis using the following, starting from glucose ending in pyruvic acid.

2011 October (Improvement)
1. Breakdown of glucose to pyruvic acid is glycolysis.

a. How many molecules of pyruvic acid are produced from a glucose molecule?
b. Write the steps in which ATP is used during glycolysis. (4)

OR
The TCA cycle starts with the condensation of acetyl group with OAA and water to yield citric acid.

1. Observe the given figure and answer the questions. 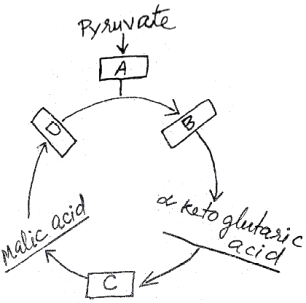 OR
2. Observe the incomplete schematic representation given below and answer the questions.

a. Identify this pathway common for both aerobic and anaerobic respiration. (½)
b. Complete the scheme by filling the boxes A, B, C and D. (4 x ½ =2)
c. Mention the three major ways in which different cells handle pyruvic acid produced by this pathway. (1½)

2. Observe the illustration given below and answer the following questions. (3) 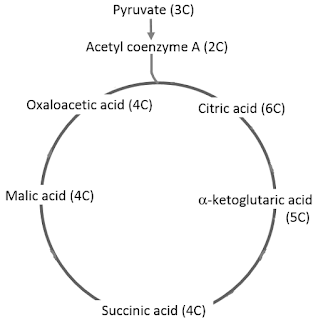 a. Identify the cyclic pathway.
b. Where does it occur?
c. Identify the steps of this pathway in which decarboxylation takes place.

2013 March
1. Analyze the given statements and correct them with respect to the underlined words.

a. Respiration is an anabolic pathway. (1)

2. Breakdown of glucose in respiration is listed under glycolysis and Krebs cycle.

a. Locate the site of glycolysis and Krebs cycle in the cell. (1)
b. Glycolysis is a partial oxidation process. Justify. (2)

a. Which organelle is associated with this process?
b. Name the phase of cellular respiration that is common to both aerobic and anaerobic condition.
c. Draw the schematic representation of that phase. (1 + 1 + 2 = 4)

OR
During terminal oxidation, electrons in the hydrogen atoms are transported to the oxygen through a series of electron carriers in ETS. The electron carriers are given below FMN, FAD, Ubiquinone, FeS cyt a, cyt b, cyt c, cyt a3 etc.

a. Briefly explain ETS with schematic representation.
b. Where does ETS occur? (3 + 1 = 4)

2014 March
1. Anaerobic respiration is also occurs in animal cells. Suggest an occasion for this. (1)

2. Glycolysis is present in all organisms and it is the only process of respiration in anaerobic organisms.

a. Arrange them in order and draw a complete cycle.
b. Who traced this cycle?
c. Where does it take place? (4)

2. The metabolic pathway through which electrons pass from one electron carrier to another is called the electron transport system. Some electron acceptors are given below:

2015 March
1. Out of the four statements given below related to respiration, the correct statements are:

i) Though respiration has traditionally been considered a catabolic process, it would be better to consider it as an amphibolic pathway.
ii) In muscles when oxygen is inadequate, lactic acid is reduced to pyruvic acid.
iii) When fats are used in respiration, the RQ is greater than one.
iv) In respiration, the energy of oxidation-reduction is utilized for phosphorylation. (1)

2. Two crucial events of aerobic respiration takes place in two - parts of mitochondria. Locate the two parts and mention the two events in one or two sentences each. (3)

2. The following compounds are intermediate in glycolysis or in Krebs’ cycle. Write them in proper column of the table.

2. Fermentation is the incomplete oxidation of pyruvic acid. Find the difference between two types of fermentations in microorganisms. (2)

2017 March
1. Glycolysis is the partial oxidation of glucose to produce two molecules of pyruvic acid.

a) Where does glycolysis occur?
b) Steps of glycolysis are given below. Fill up the blank boxes. (4) 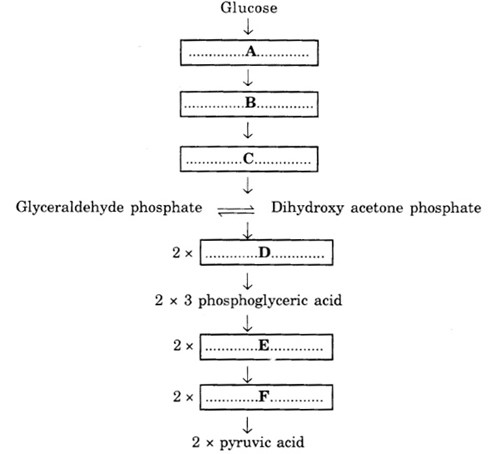 OR The complete oxidation of pyruvic acid yields three molecules of CO2 by a cyclic process in the matrix of mitochondria.

a) Who ﬁrst develop this cycle?
b) Draw a diagrammatic sketch of the identiﬁed cycle. (4)

2017 July (Improvement)
1. Glycolysis is the common phase in both aerobic and anaerobic respiration. Where does it takes place and What is the end product of glycolysis? (2)

2. The figure showing the pathway of Tricarboxylic acid cycle is given below. Name the compound present in the position of A, B, C, D. 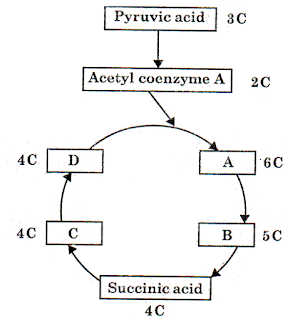 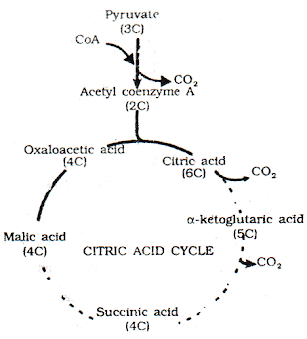 Identify the steps where FADH2 and GTP are synthesized.

2. The breakdown of glucose to pyruvic acid is called glycolysis. Where does it occur in a cell? How many ATP molecules are directly synthesized during this process?