1. a) Write the name of the stored food of the algal classes in the table given below (1)

2012 March
1. Most Pteridophytes are homosporous but there are exceptions.

a. Identify two heterosporous genera. (1)
b. ‘Heterospory is a precursor to seed habit’. Point out any one common character found in heterospory and seed habit. (1)

OR
2. Even though algae are primary producers on aquatic ecosystems, man is benefited by algae in a variety of ways. Write any four points in favour of this statement. (2)

2012 September (Improvement)
1. The following is a list of characteristic features of angiosperms and gymnosperms. Choose those characters that belong to gymnosperms. (2)

2013 March
1. ‘Double fertilization is an event unique to angiosperms’.

a. Mention the two fusions in this event. (1)
b. Name the products obtained as a result of these fusions. (1)

2013 September-October (Improvement)
1. Give reasons for the following:

a. Bryophytes are called amphibians of plant kingdom.
b. Fertilization in angiosperm is known as double fertilization. (1+1=2)

2014 March
1. Unlike a majority of the Pteridophytes, genera like Selaginella and Salvinia show a unique feature in spore formation.

2015 September (Improvement)
1. ‘Amphibians of plant kingdom’ is used to denote a specific group in plant kingdom.

Name the plant group and list any three vegetative or reproductive characters of that plant group. (2)

OR
Distinguish between mycorrhiza and coralloid roots. (2)

1. The given figure shows a plant belonging to liverworts. Identify the plant. Name the asexual buds seen on it and write their features. 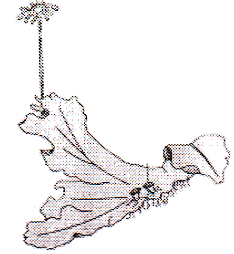