2010 March
1. Choose the appropriate function from the bracket and fill up the blanks against each plant hormone in the table. (2)

(Ripening of fruits, helps to overcome apical dominance, increase in length of stem in sugarcane, induction of parthenocarpy)

2. Grasses are capable of regeneration in spite of continuous grazing by cattle. Suggest the reason for it. (1)

1. Label the phases of growth in the given growth curve. (1½) 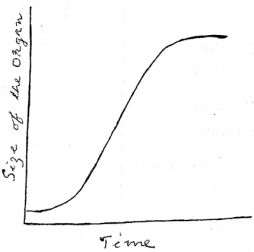 2. Removal of terminal buds is a usual practice in tea plantation. Explain the reason. Name a synthetic auxin. (1½)

1. Given below is the growth curve of a plant. Observe it and answer the questions. 1. Suggest the reason for the following: (2)

a. Farmers remove leaves of banana plants before planting.

a. Name any two artificial phytohormones.
b. Mention their importance in agriculture.

2013 March
1. Analyze the given statements and correct them with respect to the underlined words.

a. The site of perception of light by a plant for a photoperiodic response is a flower. (1)

2013 September-October (Improvement)
1. Given are certain physiological effects. Name the plant hormone responsible for it. (3)

2014 March
1. By observing the relationship of the first pair, fill in the blanks of the second pair.

2. Which one of the plant growth regulators would you use if you are asked to do the following processes?

2014 August (Improvement)
1. In certain plants, a tolerance to various kinds of stresses such as severe drought can be overcome by the production of a hormone. Name this hormone. (1) 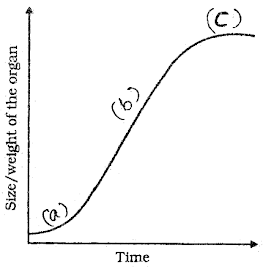 2015 March
1. Apical dominance and bolting are two physiological phenomena shown by plants due to the activity of two growth regulators.

i) The growth regulators concerned are:

ii) Distinguish between the two phenomena. (2)

2. In most of the plants, roots are meant for absorption and fixation. But there are exceptions to these functions. Justify the statement citing at least three examples. (3)

OR
The main function of most of the stems is spreading out branches, bearing leaves, flowers and fruits and the conduction of materials. But there are exceptions to this. Justify the statement citing at least three examples.

2016 March
1. a) Identify the odd one from the given list of plant growth regulators.

2017 March
1. Who among the following scientists is related with the identiﬁcation of cytokinins?

2017 July (Improvement)
1. An enzyme present in plants, which shows carboxylation and oxygenation activity. Identify the enzyme. (1)

2. Ethylene is a gaseous hormone. Describe its four different actions in plants. (2)

1. Write a note on the phenomenon plasticity exhibited by plants with an example.