2010 March
1. Label the marked parts in the given diagram of a chloroplast. 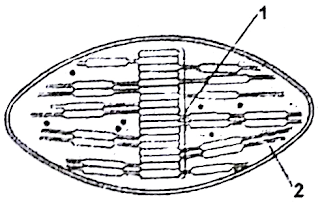 2. Comment on the specialty of carbon fixation in some plants adapted to dry tropical regions. What are the anatomical peculiarities of the leaves of these plants? (3)

1. As part of an experiment to study the influence of light on carbohydrate synthesis, a potted plant was kept in light for some time and then it was transferred to dark room. (2)

2. Calvin, Benson and others found that during photosynthesis, the first stable product in sugar formation is 3-phosphoglyceric acid, while Hatch and Slack showed that it is oxaloacetic acid. Comment on these contradicting observations. (2)

3. Given below are the scientific terms related to photosynthesis. Classify them in appropriate manner in the given table.

1. Calvin and his co-workers worked out the whole pathway of CO2 fixation and showed that the pathway is operated in a cyclic manner. (4)

a. Draw this cycle using the given terms in the correct order.

OR
Pigments in plants are organized into two photochemical light harvesting complexes.

1. During photosynthetic CO2 fixation certain plants, produce PGA as first stable product. Name such plants. Who reported the pathway? What is the enzyme for carboxylation? Name the molecule which accepts CO2 in such plants. (2)

2. Given diagram is the chemiosmotic hypothesis of ATP formation during light reaction. Complete the numbered places. (2) 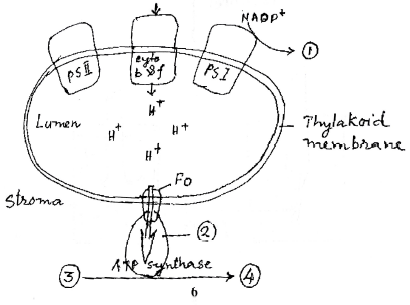 1. An anatomist observed a peculiar type of large spherical bundle sheath cells in sugarcane leaf and a physiologist identified the presence of PEP carboxylase in that leaf mesophyll.

2. ‘Photorespiration is a curse to plants’.

a. Evaluate this statement. (1)
b. Find the reason for this event to take place. (1)

1. Light reaction and dark reaction are the two stages of photosynthesis.

a. Where does light reaction occur?
b. What are its end products?
c. Comment on their roles in dark reaction.

2013 March
1. C4 plants are adapted to overcome a wasteful process found in C3 plants and hence productivity and yields are better in these plants.

a. Name the wasteful process found in C3 plants. (1)
b. Identify the cells involved in the C4 pathway. (1)
c. Write any two differences between C3 plants and C4 plants. (2)

2013 September-October (Improvement)
1. Light reaction of photosynthesis is divided into two processes. In one process the electrons emitted will return to the place from where it is emitted.

a. What are the names of these two processes?
b. What happens to the electrons in the second phase?
c. Explain it with schematic representation. (3)

2. RuBisCo is an enzyme that catalysis two entirely different processes. 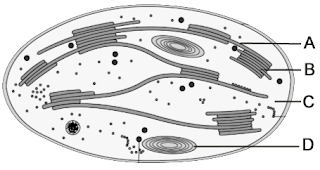 2014 March 1. Normally, roots grow into the soil. But in some plants like Rhizophora, many roots come out of the ground and grow vertically upwards. What are these roots called? Give their function. (½ + ½ = 1)

2. Plants that are adapted to dry tropical regions have a special type of CO2 fixation in addition to the C3 cycle.

a. Name this pathway. (1)
b. Can you identify any specialty in the leaf anatomy of such plants? If so, what is this anatomy called? (1)
c. Which is the primary CO2 acceptor in this pathway? (1)
d. Write any one advantage of such plants over C3 plants. (1)

OR
The use of radioactive C14 by Melvin Calvin in algal photosynthesis studies led to the discovery of CO2 fixation in green plants.

a. Identify the first stable product in this CO2 fixation cycle. (1)
b. What are the three main stages of this cycle? (1)
c. Name the enzyme which catalyzes the first stage of this cycle. (1)
d. Work out how many ATP and NADPH molecules will be required to make one molecule of glucose. (1)

2015 March
1. There is a clear division of labour within the chloroplast. Substantiate the given statement with an explanation stating two points. (2)

OR
Photosynthesis can be considered as the most significant physicochemical process on earth. Evaluate this statement citing any two signiﬁcances.

2. Name the following in C4 pathway in C4 plants:

b) Illustrate the major advantages of C4 plants over C3 plants. (3)

2. Define Blackman's law of limiting factors and identify any two important factors which influence the rate of photosynthesis in plants. (2)

2017 July (Improvement)
1. An enzyme present in plants, which shows carboxylation and oxygenation activity. Identify the enzyme. (1)

a) Name the types of photo-phosphorylation.
b) Distinguish between them. (Hint: Any two differences) (3).

OR
Observe the given figure and describe the process of ATP synthesis. 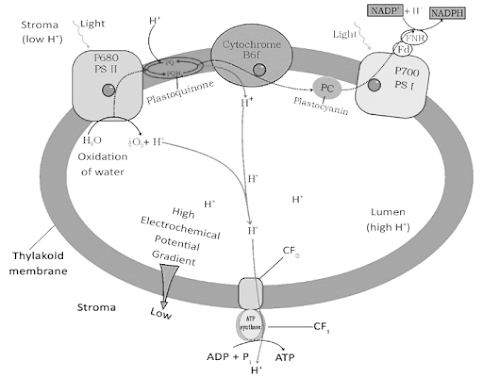 1. Choose the correct answer from the bracket.

2. Photosynthesis is a process influenced by environmental factors as well as plant factors. Mention three factors under each category.