When PS II absorbs red light of 680 nm wavelength, electrons are excited and transferred to an electron acceptor.

The electron acceptor passes them to a chain of electrons transport system consisting of cytochromes.

This movement of electrons is downhill, in terms of redox potential scale.

The electrons are transferred to the pigments of PS I.

Simultaneously, electrons in PS I are also excited when they receive red light of 700 nm and are transferred to another accepter molecule having a greater redox potential.

These electrons are moved downhill to a molecule of NADP+. As a result, NADP+ is reduced to NADPH + H+.

Transfer of electrons from PS II to PS I and finally downhill to NADP+ is called the Z scheme, due to its zigzag shape. This shape is formed when all the carriers are placed in a sequence on a redox potential scale. 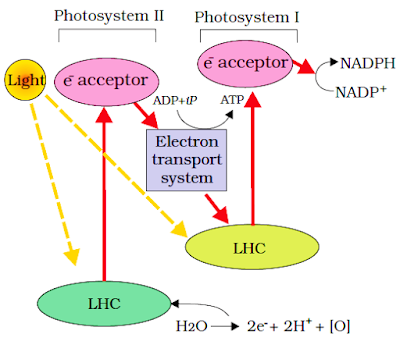 
The water splitting complex in PS II is located on the inner side of the thylakoid membrane.

Water is split into H+, [O] and electrons.

Thus PS II provides electrons needed to replace those removed from PS I.

The protons (H+) are used to reduce NADP to NADPH.

Oxygen is liberated as a by-product of photosynthesis.


The synthesis of ATP by cells (in mitochondria & chloroplasts) is called phosphorylation.

Photo-phosphorylation is the synthesis of ATP from ADP in chloroplasts in presence of light.

It occurs in 2 ways: Non- cyclic and Cyclic.

a) Non-cyclic photo-phosphorylation
It occurs when the two photosystems work in a series, (first PS II and then PS I) through an electron transport chain as seen in the Z scheme.

It is a non-cyclic process because the electrons lost by PS II do not come back to it but pass on to NADP+. 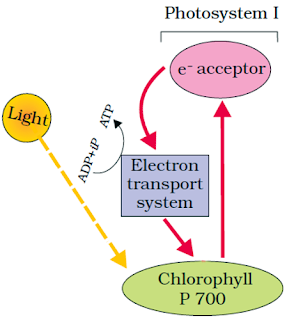 It occurs in stroma lamellae when only PS I is functional.

The electron is circulated within the photosystem and the ATP synthesis occurs due to cyclic flow of electrons.

The lamellae of grana have PS I & PS II. The stroma lamellae membranes lack PS II and NADP reductase.

The electron does not pass on to NADP+ but is cycled back to PS I complex through electron transport chain.

Cyclic photophosphorylation also occurs when only light of wavelengths beyond 680 nm are available.


It explains mechanism of ATP synthesis in chloroplast.

Chemiosmosis: Movement of ions across a semipermeable membrane. It occurs in chloroplast and mitochondria.

Chemiosmosis needs a membrane, a proton pump, a proton gradient (across thylakoid membranes) and ATP synthase.

Splitting of water occurs on the inner side of the membrane. So the protons accumulate in the lumen of thylakoids.

As electrons move through the photosystems, protons are transported across the membrane. It is due to the removal of protons from the stroma for the following reasons:
Hence, protons in stroma are decreased but in lumen, protons are accumulated. It creates a proton gradient across the thylakoid membrane and decrease in pH in the lumen. 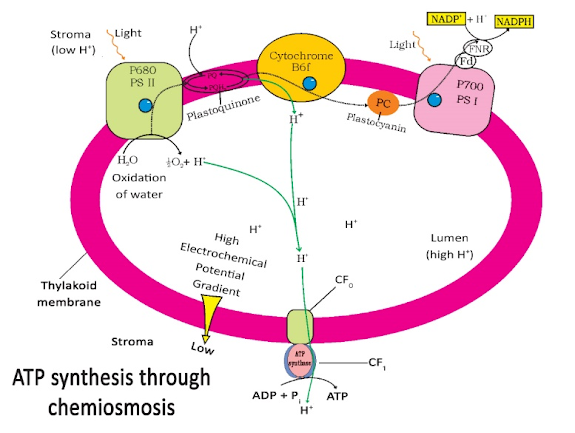 Breakdown of proton gradient leads to synthesis of ATP by ATP synthase enzyme.

The ATP synthase consists of two parts:
Energy is used to pump protons across a membrane, to create a gradient or a high concentration of protons within the thylakoid lumen.

ATP synthase has a channel for the diffusion of protons back across the membrane. This releases energy to activate ATP synthase that catalyses formation of ATP.
===========
👇 Select Your Topic Here 👇