2010 March
1. The nitrogenase enzyme and leghaemoglobin are two important compounds related to nitrogen fixation in plants. Mention the function of each. (2)

1. Observe the diagram and answer the following: (2) 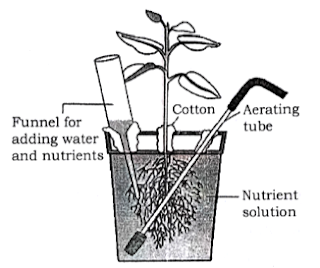 a. This is a peculiar type of plant cultivation. Name it.
b. Aeration is necessary for the conduct of this type of cultivation. Why?

2. Reduction of nitrogen to ammonia by living organisms is called biological nitrogen fixation. Can you write about one free living nitrogen fixing aerobic microbe? (1)

1. In the given flow chart of N2 cycle write the name of organisms involved in the numbered places. (2) 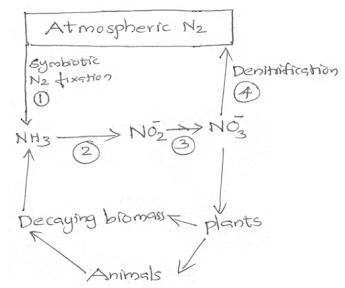 1. a) "Carotenoids are responsible for the pink colour of root nodule in pea plant".

b) The pigment present in root nodule is called, ‘Oxygen scavenger’. Justify. (1½)

1. The biochemical assay of some plants indicate the presence of Gold, Vanadium, Silicon etc. but these elements are not considered as essential elements. Comment (2)

2013 March
1. ‘In a plant, deficiency of N2 is visible in older parts and that of Ca is visible in younger parts’. Critically evaluate the statement. (2)

2013 September-October (Improvement)
1. Nitrogen in the atmosphere exist as N2 (N ≡ N). But it cannot be absorbed by plants as such. So it is converted into ammonia (NH3) by microorganisms and gets fixed in the soil.

a. Name the enzyme in the microorganisms which help to convert nitrogen into ammonia.
b. What is the role of leg-haemoglobin in this process? (1)

2014 March
1. The deficiency symptoms of macro elements like calcium tend to appear first in the young tissues. Why? (1)

2014 August (Improvement)
1. Observe the diagram given below.

2015 March
1. Even though more than sixty elements are found in different plants, all are not essential. Write any two criteria for the essentiality of an element. (2)

2015 September (Improvement)
1. Steps of conversion of atmospheric nitrogen to ammonia by nitrogen fixing bacteria are given below.

2017 July (Improvement)
1. Ammonia is used to synthesise amino acids in plants by two ways. Name the two ways of synthesis of amino acids. (2)