CELL THE UNIT OF LIFE

2010 March
1. Label the marked parts in the given diagram of a chloroplast. 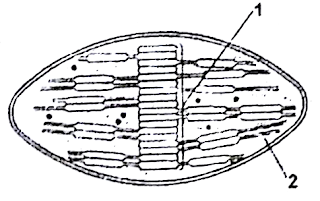 2. (a) Choose from the bracket, the name of the part of a bacterial cell that constitutes extra genomic DNA.

(b) Write any one of its functions.

1. Cell membrane is comprised of lipids and proteins. Membrane proteins mediate transfer of molecules across it. (1)

a. Suggest a model of membrane constitution that is suitable for this function.

b. Give the name of scientist who proposed it.

a. Mitochondria are called the powerhouses of the cell.

b. A metabolic product from cytoplasm is needed for energy production in mitochondria.

2. Plastids are found in all plant cells and in euglenoids. Draw a diagram of the chloroplast and label the following parts:

1. Examine the diagram of a eukaryotic cell. Which one of the labeled cell organelles is present in bacteria? Membrane extensions into the bacterial cell are called mesosomes. What are their forms and function? (3) 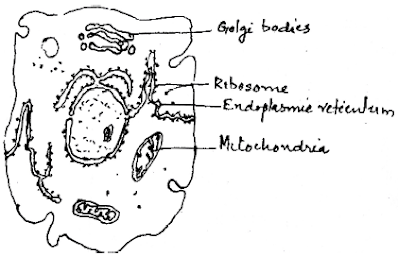 1. a) Identify the cell organelle found both in eukaryotic and prokaryotic cells. (½)

b) Justify its presence in both types of cells. (½)

a) Synthesis and storage of energy     i. Golgi apparatus

b) Packaging and delivery of materials     ii. Mitochondria

a. Identify the organelles with double membrane envelope.

b. Mention the functions of these organelles.

1. An accepted model of the structure of a cell membrane was proposed by Singer and Nicolson.

b. List the 2 major biomolecules which this membrane is composed of. (1)

c. Mention two important points of this model from the point of view of function. (1)

1. The diagrams a, b, c given below show three kinds of chromosomes. Of this, which is metacentric non-satallite chromosome? Justify your answer. (1) 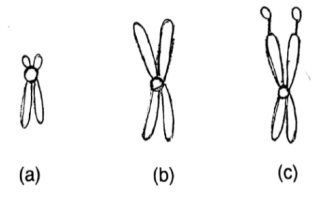 1. Prokaryotic cells possess a special membranous structure which is formed by the extensions of the plasma membrane in the form of vesicles, tubules and lamellae. Identify this structure and write any one of its functions. (½ + ½ = 1)

b. The centrioles form the basal body of cilia and flagella.

c. Ribosomes are not surrounded by membranes.

2014 August (Improvement)
1. In which hydrolases, the membrane bound vesicles are present? (1)

2. Distinguish between the characters of chloroplast and ribosomes from the given list and write them in appropriate columns.

1. a) Due to the presence of a secondary construction, a knob-like small fragment appears in some chromosomes called

b) Classify chromosomes based on the position of centromere. (2)

2. Name the types of chromosome based on the position of centromere in the figure and label the parts A, B & C. (2)

2016 March
1. Observe the given diagram. Analyze this diagram and explain the structure of plasma membrane. (3) 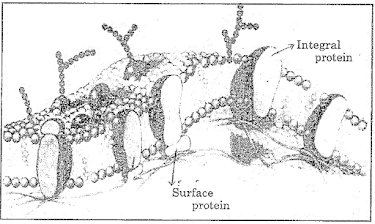 2017 March
1. a) Identify a cell organelle which contains hydrolytic enzymes.

2017 July (Improvement)
1. Position of centromere determine the shape of the chromosomes.

a) Name the different types of chromosomes based on the position of centromere.

b) Draw any one chromosome among them. (3)

1. Ribosomes are organelles without a membrane found in all cells. Name another organelle devoid of membrane, seen in animal cells. Write its function.