Changes in population density give some idea about the population – whether it is flourishing or declining.

Under normal conditions, births & deaths are important factors influencing population density. Other 2 factors have importance only under special conditions. E.g. for a new colonizing habitat, immigration may be more significant to population growth than birth rates.

Resources (food & space) are essential for the unimpeded population growth.

If resources are unlimited, each species shows its full innate potential to grow in number. Then the population grows in an exponential or geometric fashion.

The r (‘intrinsic rate of natural increase’) is an important parameter for assessing impacts of any biotic or abiotic factor on population growth. 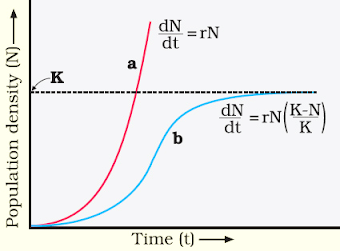 In nature, a given habitat has enough resources to support a maximum possible number, beyond which no further growth is possible. It is called carrying capacity (K).

A population with limited resources shows initially a lag phase, phases of acceleration & deceleration and finally an asymptote. This type of population growth is called Verhulst-Pearl Logistic Growth. It is described by following equation:

Since resources for growth for most animal populations are limited, the logistic growth model is more realistic.

Some organisms breed only once in their lifetime (Pacific salmon fish, bamboo) while others breed many times (most birds and mammals).

These facts indicate that life history traits of organisms have evolved due to limited abiotic and biotic components of the habitat.
===========
👇 Select Your Topic Here 👇