17. BREATHING AND EXCHANGE OF GASES

Respiration is the oxidation of nutrients in the living cells to release energy for biological work.Breathing is the exchange of O2 from the atmosphere with CO2 produced by the cells.

It consists of a pair of air passages (air tract) and lungs. 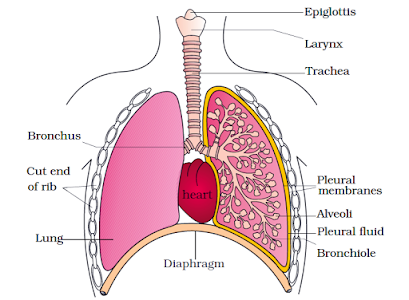 Conducting part which transports the atmospheric air into the alveoli, clears it from foreign particles, humidifies and brings the air to body temperature.

Each terminal bronchiole gives rise to many very thin and vascularised alveoli (in lungs).

Trachea, all bronchi and initial bronchioles are supported by incomplete cartilaginous half rings.

Lungs situate in thoracic chamber and rest on diaphragm.

Right lung has 3 lobes and left lung has 2 lobes.

The pleural fluid present in between these 2 layers lubricates the surface of the lungs and prevents friction between the membranes.

Alveoli are the structural and functional units of lungs.