Sewage is treated in Sewage Treatment Plants (STPs) to make it less polluting. It includes 2 stages.

It is the physical removal of particles. It includes

a.    Removal of floating debris by sequential filtration.

b.    Removal of the grit (soil & pebbles) by sedimentation.

Primary effluent is passed into large aeration tanks and constantly agitated. This allows vigorous growth of useful aerobic microbes into flocs (bacteria associated with fungal filaments to form mesh-like structures). These microbes consume the organic matter in the effluent. This reduces the BOD (Biochemical Oxygen Demand) of the effluent.

BOD: Amount of O2 consumed by bacteria to oxidize all organic matter in one litre of water. It is a measure of organic matter present in the water. The greater the BOD more is its polluting potential.

The effluent is then passed into a settling tank where the bacterial ‘flocs’ are sediment. This sediment is called ‘activated sludge’.

A small part of the activated sludge is pumped back into the aeration tank to serve as the inoculum.

The remaining sludge is pumped into large tanks called anaerobic sludge digesters. Here, some anaerobic bacteria digest the bacteria and fungi in the sludge by producing gases like CH4, H2S and CO2. These gases form the biogas.

The effluent is released into natural water bodies like rivers and streams.

4. MICROBES IN THE PRODUCTION OF BIOGAS

-    Biogas is a mixture of gases (mainly CH4) produced by the microbial activity. It is used for cooking & lighting.

-    Methanobacterium is found in the anaerobic sludge and rumen of cattle (for cellulose digestion).

-    The cattle dung (gobar) is rich in these bacteria. Dung can be used for generation of biogas (Gobar gas).

-    The Biogas plant consists of

·   A concrete tank (10-15 feet deep) to collect bio-wastes and slurry of dung. A floating cover is placed over the slurry, which keeps on rising as the biogas is produced.

·   An outlet which is connected to a pipe to supply biogas.

·   An outlet to remove spent slurry (used as fertilizer). 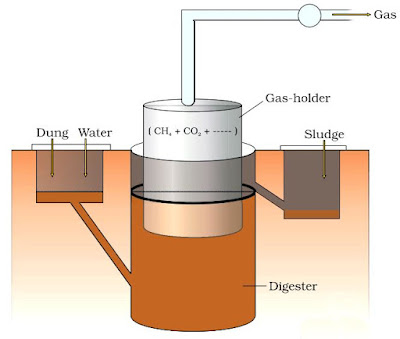