12. BIOTECHNOLOGY AND ITS APPLICATIONS

- Products from non-human sources cause unwanted immunological responses. But recombinant therapeutics does not have such problems.

-  At present, about 30 recombinant therapeutics have been approved. Of these, 12 are being marketed in India.

-  Insulin from the pancreas of animals (cattle & pigs) causes allergy or other types of reactions to the foreign protein.

-   Now, it is possible to produce human insulin using bacteria.

-  Insulin consists of two short polypeptide chains (chain A & chain B) that are linked by disulphide bridges.

- In mammals, insulin is synthesized as a pro-hormone (pro-insulin). It is processed to become mature and functional hormone. 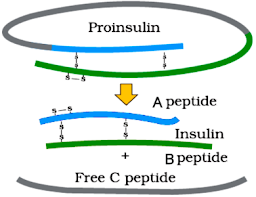 - The pro-hormone contains an extra stretch called C peptide. This is removed during maturation into insulin.

- In 1983, Eli Lilly (an American company) prepared two DNA sequences corresponding to A & B chains of human insulin and introduced them in plasmids of E. coli to produce insulin chains. Chains A & B were combined by creating disulfide bonds to form human insulin (Humulin).

-  It is a method to correct a gene defect in a child/embryo.

-  Here, genes are inserted into a person’s cells and tissues to treat a hereditary disease. It compensates for the non-functional gene.

-  First clinical gene therapy (1990) was given to a 4-year old girl with adenosine deaminase (ADA) deficiency.

-  This is caused due to the deletion of a gene of adenosine deaminase (an enzyme for the functioning of immune system). It can be cured by bone marrow transplantation or by enzyme replacement therapy (injection of ADA). But these are not completely curative.

- Gene therapy for ADA deficiency: Collect lymphocytes from the patient’s blood and grow in a culture → Introduce a functional ADA cDNA into lymphocytes (using a retroviral vector) → They are returned to the patient.

This should be periodically repeated as lymphocytes are not immortal.

- If the ADA gene from marrow cells is introduced into cells at early embryonic stages, it could be a permanent cure.

-    Conventional methods (serum & urine analysis) are not suitable for early diagnosis of diseases.

-    It is possible by techniques such as Recombinant DNA technology, PCR & ELISA.

- Presence of a pathogen is normally suspected only based on symptoms. By this time, the concentration of pathogen is already very high in the body.

- However, very low concentration of a bacteria or virus can be detected by amplification of their nucleic acid by PCR.

o  To identify many other genetic disorders.

- A single stranded DNA or RNA, tagged with a radioactive molecule (probe) is hybridized to its complementary DNA in a clone of cells. It is detected by autoradiography. The clone having mutated gene will not appear on photographic film, because the probe will not have complementarity with mutated gene.

-  It is based on antigen-antibody interaction.

-  Infection by pathogen can be detected by the presence of antigens (proteins, glycoproteins, etc.) or by detecting the antibodies synthesized against the pathogen.