Biodiversity is the diversity of biological organisation ranging from cellular macromolecules to biomes.
Edward Wilson popularized the term ‘biodiversity’.

1.   Genetic diversity: Diversity shown by a single species at genetic level. E.g. Rauwolfia vomitoria (Himalaya) shows genetic variation in the potency & concentration of the chemical reserpine. India has more than 50,000 different strains of rice and 1000 varieties of mango.

o According to Robert May’s Global estimate, about 7 million species would have on earth. (He considered the species to be discovered in the tropics. i.e. only 22% of the total species have been recorded so far).

o Animals are more diverse (above 70%) than plants including Plantae and Fungi (22%).

o Number of fungi species is more than the combined total of the species of fishes, amphibians, reptiles & mammals. 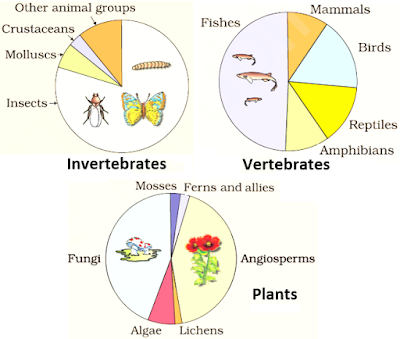 o India has only 2.4% of world’s land area, but has 8.1% of the species diversity. India is one of the 12 mega diversity countries of the world. Nearly 45,000 plant species and twice as many of animals have been recorded from India.

·    Conventional taxonomic methods are not suitable for identifying microbial species.

·    In laboratory, many species cannot be cultured.

-    Species diversity decreases from the equator to the poles.

-    Biodiversity (species richness) is highest in tropics because

According to the study of Alexander von Humboldt in South American jungles, within a region, species richness increases with increasing explored area, but only up to a limit.

Relation between species richness and area gives a rectangular hyperbola.

-    E.g. for frugivorous birds and mammals in the tropical forests of different continents, the Z value is 1.15.

-    Increased diversity contributes to higher productivity. It is essential for ecosystem health and survival of human race.

-    ‘Rivet popper hypothesis’: It is an analogy used to understand the importance of biodiversity.

It is proposed by Stanford ecologist Paul Ehrlich.

In an airplane (ecosystem), all parts are joined with many rivets (species). If passengers pop a rivet (extinction of a species), it may not affect flight safety (functioning of the ecosystem). But as more and more rivets are removed, the plane becomes dangerously weak. Loss of rivets on the wings (key species that drive major ecosystem functions) is more dangerous than loss of a few rivets on the seats or windows.