a. Label the parts A and B.
b. Even though concentrated HCl is stored in the stomach, it will not generally damage the stomach wall. Why?

1. “The end products of fat digestion are not absorbed directly into the blood stream.” Justify. (2)

1. The breakdown of biomacromolecules in the duodenum is mentioned below. Fill the blank boxes with correct terms. (2)

1. Observe the diagram and answer the following questions. 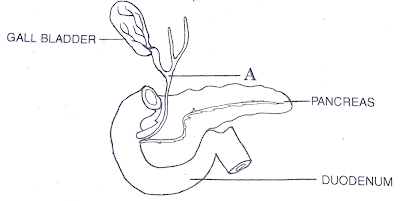 a. Identify the duct labeled A and the secretion it pours into the duodenum. (1)
b. Mention two functions of secretion in digestion. (1)

1. Bile contains no digestive enzymes, so bile is not needed for digestion. Do you agree with this statement? Justify your answer. (2)

1. Observe the graph showing the activity of an enzyme influenced by pH.

a. Name the possible enzyme involved in this reaction. (½)
b. Where is its site of action? (½)
c. Mention any other factor which affects this enzyme activity that results a similar pattern of graph. (½)
d. Name another similar enzyme acting on the same substrate. (½)

1. Sketch an outline (or a flowchart) of protein digestion taking place in your alimentary canal. (3)

1. Pro-enzyme pepsinogen is a protein digesting enzyme (inactive form) of the human digestive system.
a. Name the digestive gland which secretes this enzyme.
b. How does pepsinogen change into its active form, pepsin?
c. Complete the following sentence: