Most of the diploid organisms are with separate sexes. The organisms producing sperms are called males and those producing eggs (ova) are called females.
Chromosome is the major factor to determine the sex of an organism.
The chromosomes that are involved in sex determination are called sex chromosomes (allosomes). They include X & Y chromosomes.

Autosomes are chromosomes other than sex chromosomes. Number of autosomes is same in males and females.

Henking (1891) studied spermatogenesis in some insects and observed that 50 % of sperm received a nuclear structure after spermatogenesis, whereas other 50 % sperm did not receive it. Henking called this structure as the X body. Later it is called as X-chromosome.

During spermatogenesis, males produce 2 types of gametes- 50 % with X-chromosome and 50 % with Y-chromosome.

Females produce only ovum with an X-chromosome.

There is an equal probability of fertilization of the ovum with the sperm carrying either X or Y chromosome.

It is based on the number of sets of chromosomes an individual receives.

An unfertilised egg develops as a male (drone). It is called parthenogenesis.

Therefore, the females are diploid (32 chromosomes) and males are haploid (16 chromosomes). This is called as haplodiploid sex determination system. 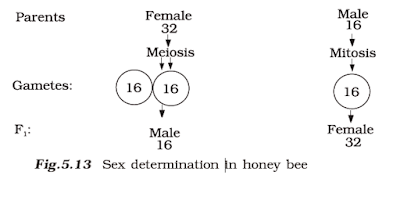 In this system, the males produce sperms by mitosis. They do not have father and thus cannot have sons, but have a grandfather and can have grandsons.