Biodiversity is the diversity of biological organisation ranging from cellular macromolecules to biomes.

1. Genetic diversity: Diversity shown by a single species at genetic level. E.g. Rauwolfia vomitoria (Himalaya) shows genetic variation in the potency & concentration of the chemical reserpine. India has more than 50,000 different strains of rice and 1000 varieties of mango.

According to International Union for Conservation of Nature (IUCN, 2004) more than 1.5 million species described so far.

According to Robert May’s Global estimate about 7 million species would have on earth. (He considered the species to be discovered in the tropics. i.e. only 22% of the total species have been recorded so far).

Animals are more diverse (above 70%) than plants including Plantae and Fungi (22%).

Most species rich taxonomic group among animals are insects (70%, i.e. out of every 10 animals, 7 are insects).

Number of fungi species is more than the combined total of the species of fishes, amphibians, reptiles & mammals.

Biologists are not sure about total number of prokaryotic species because
India has only 2.4% of world’s land area, but has 8.1% of the species diversity. India is one of the 12 mega diversity countries of the world. Nearly 45,000 species of plants and twice as many of animals have been recorded from India.

Species diversity decreases from the equator to the poles.

E.g. Number of bird species in different latitudes is given below:
Tropical forest region like Equador has up to 10 times species of vascular plants as compared to a forest of equal area in a temperate region like the Midwest of USA.

Biodiversity (species richness) is highest in tropics because

According to the study of Alexander von Humboldt (German naturalist & geographer) in South American jungles, within a region, species richness increases with increasing explored area, but only up to a limit.

Relation between species richness and area for a wide variety of taxa gives a rectangular hyperbola. 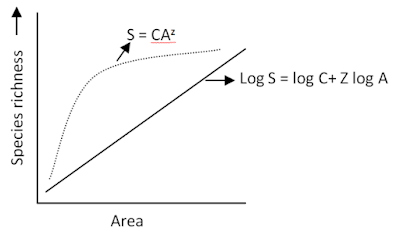 On a logarithmic scale, the relationship is a straight line described the equation

In species-area relationship among the large areas like entire continents, slope of the line is steeper (Z value: 0.6 to 1.2).

E.g. for frugivorous birds and mammals in the tropical forests of different continents, the slope is 1.15.

THE IMPORTANCE OF SPECIES DIVERSITY TO THE ECOSYSTEM

Rich biodiversity is essential for ecosystem health and imperative for the very survival of the human race.

It is an analogy used to understand the importance of biodiversity. It is proposed by Stanford ecologist Paul Ehrlich. In an airplane (ecosystem) all parts are joined together using thousands of rivets (species). If every passenger starts popping a rivet (causing a species to become extinct), it may not affect flight safety (proper functioning of the ecosystem) initially. But as more and more rivets are removed, the plane becomes dangerously weak. Loss of rivets on the wings (key species that drive major ecosystem functions) is a more serious threat to flight safety than loss of a few rivets on the seats or windows inside the plane.

27 species have been disappeared in the last 20 years.

More than 15,500 species are facing threat of extinction.

The current extinction rate is 100 - 1000 times faster than in the pre-human times. If this trend continues, nearly 50% species might be extinct within next 100 years.

Impacts of Loss of biodiversity

It is the most important cause of biodiversity loss.

Thousands hectares of rain forests is being lost within hrs.

The Amazon rain forest is being cut for cultivating soya beans or for conversion of grass lands for cattle.

Alien species cause decline or extinction of indigenous species. E.g.

Illegal introduction of the African Catfish (Clarias gariepinus) for aquaculture is posing a threat to the indigenous catfishes in our rivers.

When a species becomes extinct, the plant and animal species associated with it also extinct. E.g.

There are 3 categories of reasons for conservation.

More than 25% of the drugs are derived from plants.

25,000 species of plants have medicinal value.

Biodiversity has many ecosystem services. E.g.

Every species has an intrinsic value. We have a moral duty to care for their well-being.

a. In situ conservation (on site)

It is the conservation of genetic resources within natural or human-made ecosystems in which they occur. E.g. Protected areas such as National Parks, Sanctuaries, Biosphere reserves, cultural landscapes, natural monuments etc.

Sanctuary: Here, protection is given only to the animals. Collection of timbers, minor forest products and private ownership are allowed so long as they do not harm the animals. E.g. Periyar wildlife sanctuary in Kerala.

Biosphere Reserves: Areas of land or coastal ecosystems for conservation and sustainable use.

b. Ex situ conservation (off site)

These are the regions with very high species richness, high degree of endemism (species confined only to a specific region) but most threatened.

There are 34 hotspots in the world.

In this summit, 190 countries pledged to reduce the current rate of biodiversity loss.